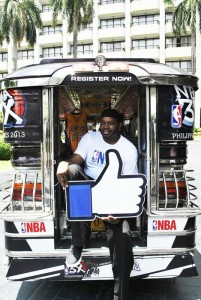 The 3-on-3basketball enthusiasts – boys and girls aged 10 to 17 years old, and adults 18 years old and older – can live out their basketball dreams at the SM Mall of Asia Music Hall when NBA 3X Philippines 2013 presented by Sprite returns to Manila from July 26 to 28.

The event combines exciting on-court competition with free authentic NBA entertainment and experiences for fans of all ages. Team slots are limited and filling up fast so fans are encouraged to sign up as soon as possible.Interested parties have until Friday, July 12 to register for the 3-on-3 portion of the event.

To date, the NBA 3X Jeepney has visited the Manila’s Sampaloc District, University Belt, Intramuros and Cubao, Quezon City, and will soon visit Mandaluyong, Makati and the Taguig area to reach students and basketball enthusiasts there.

The Wi-Fi enabled NBA 3X Jeepney is equipped with laptops where interested parties may register online for NBA 3X Philippines 2013 presented by Sprite. Lucky fans will receive a free NBA 3X baller wristband if they are among the first 10 fans to arrive at the Jeepney tour stop each day and ‘LIKE’ the NBA 3X Asia Facebook page.

Now in its third consecutive year, the hugely popular NBA 3Xevent swells in registration numbers each year. NBA Stars James Harden of the Houston Rockets and Eric Gordon of the New Orleans Pelicans will headline this year’s event and share their basketball talents with young players, while the Indiana Pacers dance team – the Indiana Pacemates–and Grizz, the Memphis Grizzlies Mascot will add even more excitement to the event. There will also be fun activities for the whole family to enjoy at the SM Mall of Asia Music Hall.

For more information on NBA 3X Philippines 2013 presented by Sprite and to register for the 3-on-3 tournament, log on to www.nba3x.com/ph. Fans can also get updates on the event by following the NBA on Twitter at www.twitter.com/nba_philippines and through Facebook at www.facebook.com/nba3xasia and www.facebook.com/philsnba.