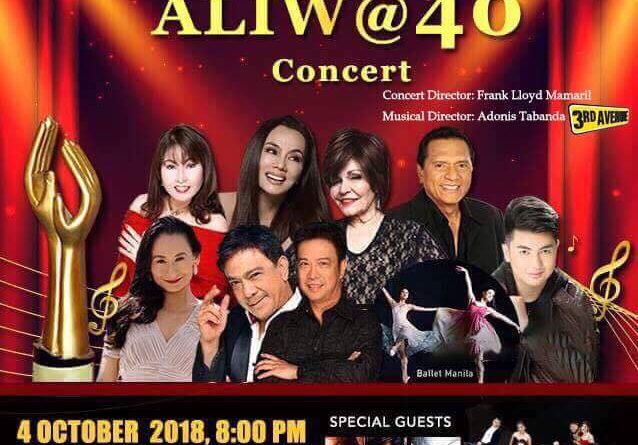 In celebration of the 40th Year Anniversary of Aliw Awards Foundation, a benefit concert is set and dubbed as “Aliw@40 Concert” ‪this coming October 4, 2018‬ (Thurs.) at the Aliw Theater in Cultural Center Complex, Roxas Blvd. in Manila.  The show is produced by TAG Media headed by Kiwanis Engr. Grace Bondad Nicolas for the benefit of the less fortunate and sickly members of Aliw Foundation led by its President Alice Reyes. 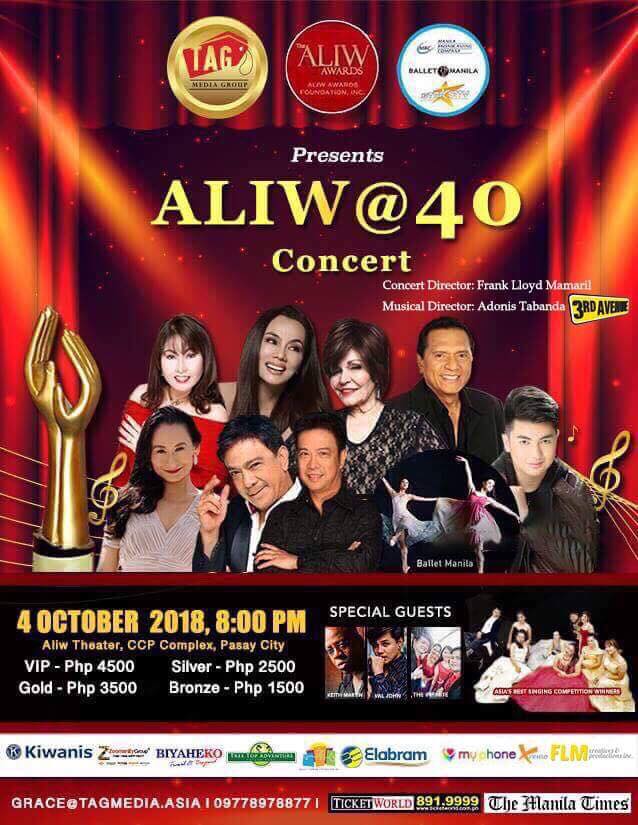 With more than 10 performers to make the celebration grand and in full force to give you a night that you will never forget, here are the performers in this one night concert:

What makes the event interesting is the combination of two young, amazing and top directors who are making a difference in their own ways both locally and abroad. The musical director is no other than Direk Adonis Tabanda who just arrived from Dubai for the sold out concert of Morrisette Amon. Concert Director Direk Frank Lloyd Mamaril on the other hand directed the 2016 Concert of Lani Misalucha, the Star Awards Concert of the Year. Both directors are in their early 30s and we’re excited for this collaboration. For them, they will make this event another showcase and a masterpiece for their careers.

Produced by Tag Media Group headed by Engr. Grace Bondad Nicolas and Co presented by Ballet Manila, Manila Broadcasting Company and Star City under Liza Macuja Elizalde, the event is a fundraising event for Aliw Awards Foundation to help entertainers who are in need. The Aliw Awards Foundation also was created to give due recognition to entertainers who perform live in the Philippines and abroad by the renowned journalist, Alice Hernandez Reyes.

For tickets and inquiries, please call ‪09778978877‬ or buy it directly via Ticket world. The event is still accepting sponsors and exhibitors.